I have had so many amazing experiences over the last 6 weeks that I want to write about but beyond the craziness of #dblog week, I simply haven’t had time to sit down and sift through everything. So I’m going to start with a quick post on something I never thought I would write about.

I’m currently in Oslo, Norway, to attend some meetings for work. I have my trusty Gluten Free Card app that explains celiac and the can’t-haves and can-haves of a gluten free diet in every language. I also know that most people in Norway speak close to perfect english and nordic countries in general are pretty aware of celiac disease and have a good offer of GF foods.

So I’ll admit that I didn’t do a whole lot of research about where I could eat before jumping on the plane. After arriving and finding my AirBnB apartment for the next two nights, I went off to wander around downtown. Eventually I found my way into a Starbucks to take advantage of some free wifi.

A few quick google searches came up with an all gluten free bakery that has closed its doors for good, and a couple of other places that were either already closed for the evening or a little too far out of my way to get to. Several websites also stated that it is fairly easy to eat gluten free in most restaurants – they get it.

But then I happened on a McDonald’s link. What was this doing on a page about GF eating? Well, as it turns out, all over McDonald’s Norway have gluten free buns for their burgers. The last time I had a meal chez MacDo (the french slang that I have gotten used to hearing) was almost 7 years ago and it was because there was no other possible choice. I was limited to salad and fries.

My CD diagnosis was 17 years ago and I think the last burger I had from McDonald’s was likely about 20 years ago. So even though I’ve never been a fan of this type of food, I decided to give it a go – just because I could.

The taste was exactly as I remembered it from 20ish years ago (which is a bit strange given the amount of time that has passed and that it was on a different continent), although I suspect the GF bun is actually better bread than the “normal” one. There. I’ve eaten it. Now I’m good to go for no more McD’s for another 20 years! And on my way back to my little apartment, I stopped by a supermarket to see what they have in their GF section. So I picked up these. It’s all super carb heavy, but I always like to bring a few things back that I can’t find at home…

Travelling with celiac disease can sometimes be a bit nerve-wracking but on the flip side, it’s fun to make some new finds.

This past week my husband and I have been childless as the girls are spending 10 days with their grandparents. It’s been eerily quiet at home but we’ve been productive with things that are difficult to do with kids under-feet (like go to Ikea and put up new wardrobes). We have also taken advantage of spontaneously being able to go out in the evening to dinner or a movie. And, since next week is our wedding anniversary (8 years!) we planned an evening out in a very nice parisian restaurant. Lucky for us, there is no shortage of choice in that regard!

A neighbour had recommended Saturne. When my husband made the reservation, he gave them a heads up about the fact that my meal needs to be completely gluten free. Eating out is always risky when you have celiac disease but luckily, I rarely have an issue in french restaurants finding gluten free food on the menu. In fact, I have insulted a few chefs over the years just by asking if the sauce might be thickened with flour (Of COURSE not, madame, we only use crème fraiche!!). I know what I generally need to avoid and what dishes are usually ok and I know where the possible stumbling points are (like a biscut sticking out of the top of a chocolate mousse). I’ve got my gluten explanations down pat in french and I have found that the nicer the restaurant, the easier it is to deal with the gluten issue.

We were glad we made a reservation as the restaurant was booked out despite the fact that we went mid week in the middle of july (when half the population of France is on holidays). After we were seated, the first thing the server said was that it was a “carte blanche” 6 course menu with 2 starters, 2 main dishes and 2 desserts, but we would have no idea what would be served until it was actually on the table.

I love being surprised by food since 99.9% of the time I know exactly what I’m eating, both in terms of making sure it’s entirely gluten free and doing my best to guestimate carb content. But it was the next question from the server that really made me smile “Do you have any food allergies?”. This question was asked at each table so we hadn’t actually needed to mention the gluten when we made the reservation.

Food allergies are not a “thing” in France. You aren’t generally asked when invited to someone’s home or when you register for a conference or banquet dinner if you are vegetarian or have any allergies.

In this situation it makes sense that they ask given that everyone in the restaurant are eating the same meal but it is not a question that you’d hear very often around here. They actually told me that the whole meal is gluten free anyway so no worries.

And it was fabulous. A variety of textures and mixes of flavours, beautiful colours on each plate and different types of plates with each course. I should have taken more pictures. Here is the second starter of lobster wrapped in leek and topped with fresh almonds and some tasty greens. 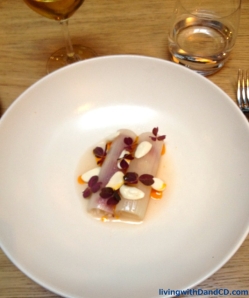 It’s always difficult to bolus correctly for meals like this but I managed with a  small square bolus at first and a regular bolus once I saw the desserts. There were minimal carbs in the first 4 dishes and I wasn’t too hard to guestimate the carbs in the desserts (or, more likely, I got lucky!). My blood sugar stayed below 160 the whole meal and I’ll give partial credit the wine that accompanied each dish for keeping my blood sugar steady around 110mg/dl all night.

The only hiccup in the meal was the last dish which was like a chocolate mousse with a dollop of hay-infused cream and topped with bits of brownie.  I politely declined and when the server remembered that I was “the one with the gluten intolerance”, she quickly took it away and brought back a very chic fruit salad with green and orange melon, rhubarb and apricots, sprinkled with a variety of fresh herbs.

With the title of this post, it sounds like I’m going out to dinner with friends! Unfortunately I don’t have the choice to leave these two “friends” at home but I certainly don’t let them stop me from going out and enjoying myself.  I am so appreciative that I can trust a restaurant to give me a truly gastronomic meal with little fear on being “glutened”.

It was a lovely and relaxing evening out and a wonderful way to celebrate 8 years of marriage.